I got out for another test sail in the laser yesterday. It was dark and grey but blowing pretty good. Everything went smoothly with the solo launch/recovery of the boat.  There were actually 3 other trailers parked in the lot when I arrived at 10am, motor boats of course, but more than I expected on a Thursday morning.  Aside from that, I was alone and didn't have to speak with anyone for about three hours.  It was very nice.  The wind was 15mph from the north (coming right off the land) so the waves were almost non existent in Clark's Cove.  After my confidence was up, I made it out past Ft. Rodman out to the New Bedford entrance markers 8 and 9 and made an effort to sail over to the lighthouse in the middle of New Bedford harbor (I'm blanking on the name right now, but it is for sale...).  I started getting cold on the upwind leg to the lighthouse, and my gut said it was time to turn around, so I didn't make it to the light house, but I will soon.

I have a cam cleat mainsheet assembly that I really want to change out to the single block w the cams being on the rail. 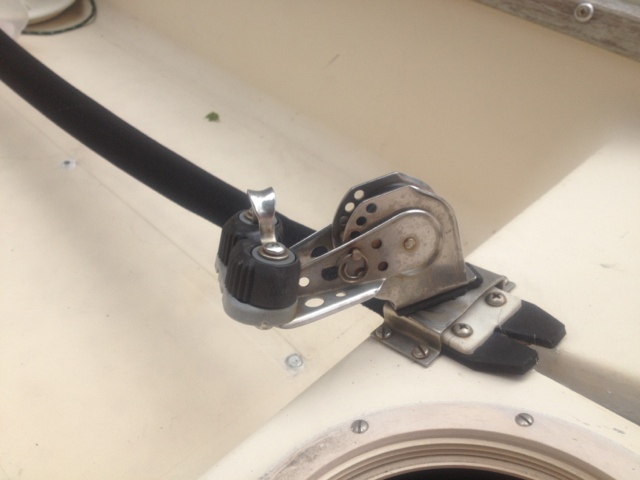 This is how I remember most of the lasers I sailed as a kid being set up and with the existing set up, I'm bound to capsize eventually from not being able to get my hand high enough to release the sheet from the cam.  That being said, I think I also want to see a bunch of other peoples set ups before I commit to a mainsheet set-up.  And based on this post from SailingForums.com, I'm not the first person to wonder this.

Being patient on making a repair decision also goes for the crazy bow repair that the last owners did.  It works, is stable, and I attribute most of the savings I pocketed during the purchase on this bad boy of a patch job. So its a love/hate relationship as far as the patch goes. Ms. Laser wouldn't be in my life with out you, however I will loath the sight of you everyday I lay my eyes on you Mr. Crazy Patch... 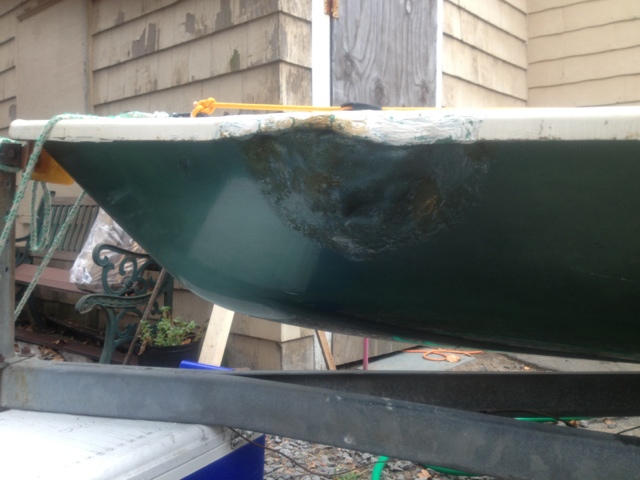 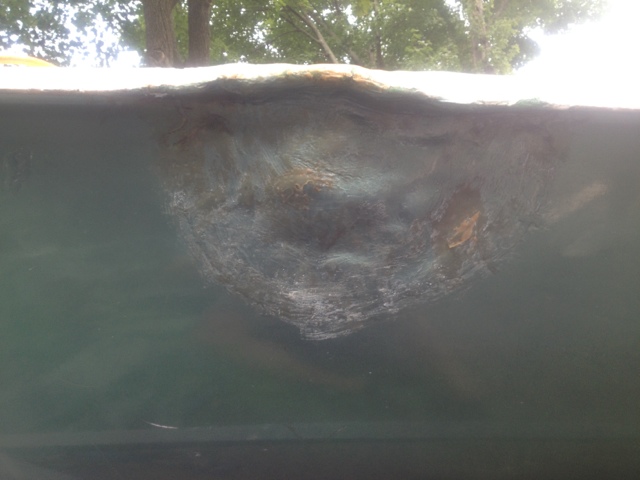 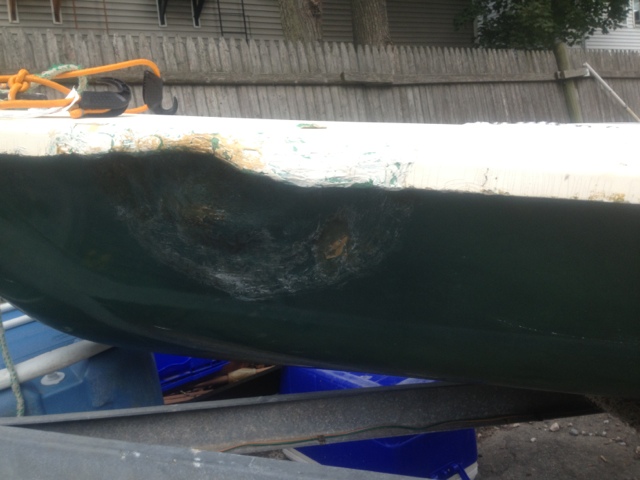 It looks like a marshmallow starting to melt by the fire, like the boat just might ooze out and drip on the ground.  I'm still undecided how much work I want to put into this particular laser hull given its age and the various issues that I am already aware of.  If its anything like my apartment house, it's really a matter of what you don't know yet that you should really be afraid of...

Later in the day I stopped at West Marine and picked up a small pack of 105/205 West Systems Epoxy/Resin.  The day before I filled up the S-4 boat "New Job" with water to find where it was leaking and I found a nice 4 inch gash in the port side below the waterline.  This is the source of the water that has been flooding the boat after 3 hours of sailing.  This past weekend, I had to sail back to the ramp, load it back on the trailer, drain it for 10 minutes and then put it back in for another 3 hours of fun.  The water was so high there was really only about 6 inches of air left in the boat.  My girlfriends father owns an auto shop so I used his tools and prepped the spot and then applied my first epoxy since I was a kid trying to make a river in my model train set.  The kit came with a small sheet for fiberglass that I cut and bedded onto the whole patch.  It takes 5-7 hours to cure so I might have a chance to get out there today to see how it worked out.  This is my backup boat to the laser for Sailtember and I might need it in a pinch if something happens to the laser.  It is also the only thing I have access to right now that I can teach my girlfriend how to sail on.  We tried the two people on a laser idea and it was fun til she got nailed in the head with the boom.  Now we are back to plan A, the mysterious New Job and it's hopefully dry hull.

Spent last night watching all the great fiberglass how to videos on YouTube.  I can't wait to have an excuse to do a bigger job with the stuff LOL.

Finally, for the Don't Judge a Book By It's Cover file: The really old crotchety looking guy with the Colonel Sanders facial hair that works at West Marine was actually SO cool and turned me on to marine.GeoGarage.com when I asked about charts for all my Sailtember exploits to come. So I will be printing and laminating from this site so I know where the rocks are.  It kills me to pay money for a map or chart. Thanks Colonel!