So this weekend I have been invited to crew on a J-80.  This is a smaller J-class boat that has the distinction of being able to "plane" (hydroplane).  That means that once you hit a certain speed, you stop pushing through the water and start riding on top of it (like a motor boat does when it is going fast).  This change in resistance causes the boat to surge forward and hit speed levels that it otherwise would not if it was still pushing water out of the way.  The Laser also has the distinction of being a good planing boat and it is by far the most affordable way to get this thrill. 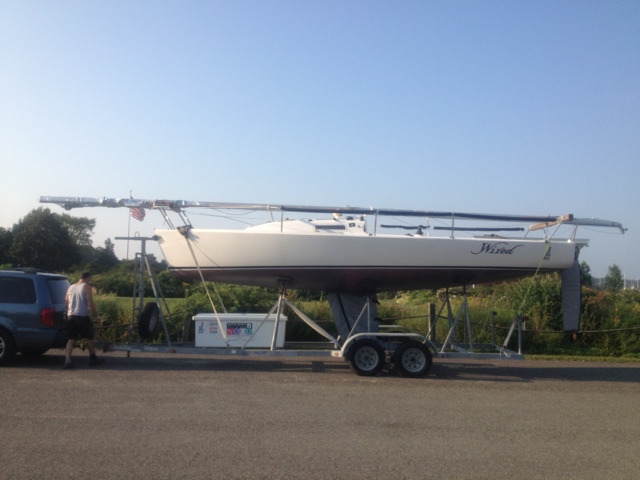 So today I met up with the boats owner in Marion to help pack her up for the road trip to Lake Winnipesaukee.  We strapped her down, shrink wrapped the shrouds and tinkered with this and that.  My experience in getting my own trailer roadworthy and all the advice I have received from my after work auto-shop drinking buddies was all very helpful. 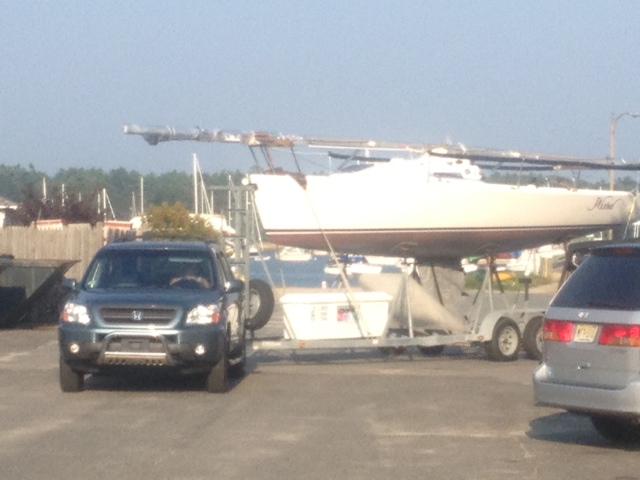 You can all place you bets now on how this Honda Pilot will fair over 700 miles of driving this weekend.


After helping out Henry, I launched the laser from the Town of Marion's "boat ramp".  It is sand with rubber mats on the ground for traction.  The only parking allowed is for people with town stickers.  They have fancy bathrooms and showers but no real ramp.  Henry had just pulled his boat out of the adjoining Boat Yard, subsequently I could park my car and trailer in his boat's parking space (he stores it on land).

I dropped the boat in at what looked like low tide.  I had no problems with the sand.  I saw maybe three people anywhere around me and a huge harbor filled with easily five hundred yachts.  Mostly sailboats but a good amount of motor boats too.

I passed two middle aged women rigging up a Bullseye.  I wished them a "Happy Sailtember!" as I passed. Later on I realized that the one other time I had sailed into Marion, the one with the large brown hair was out on this same Bullseye.  Wow, what a coincidence and she must be out on that thing all the time!

I sailed out and found a cute island that had a lot of privately owned shellfishing beds.  They were like metal cages in rows with surprisingly few indications to boaters to stay away.  I decided to pass this island on the leeward side and pretty soon, my centerboard was starting to bump into unseen underwater things (aka the bottom).  I swung around and headed back the exact way I came worried about how far into the shallow area I had actually made it.  Thankfully I came across the two ladies in the Bullseye and over light conversation, they allowed me to follow them for a safe passage through the shallows.  The belong to Beverly YC, the Bullseye is build by C.C. Shipbuilding in Wareham, the same builders that built the two boats that I learned the most on as a kid, the C.C. Mercury and the Typhoon, the shipbuilders and designers of all these boats are members of their same club and therefore they have a significant following.  Its so nice to have conversations on the water.  It is completely different than on land. I can't quite explain it.  It is similar to conversation on real hiking trails.  Everyone is in a good mood, happy to see someone else that appreciates doing what they are doing, and there is no one else around, so it feels like destiny or coincidence has brought the two parties together.

I then sailed around the harbor, looking at real estate, waving at people whose backyard run into the sea, checking out boats I cannot afford and seeing what the kids hanging out at the Tabor Academy docks were up to.  It was getting dark and it was time to go in.

The beach was empty, the parking lot was quiet and the tide was even lower now.  I was left to do my little unrigging chore by myself.  I have become quite good at it given the frequency that I am sailing lately.  Once the boat was packed away, I took some photos thinking my day was done. 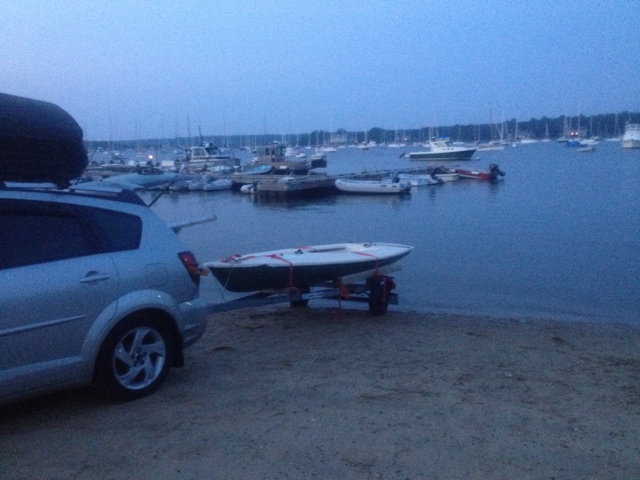 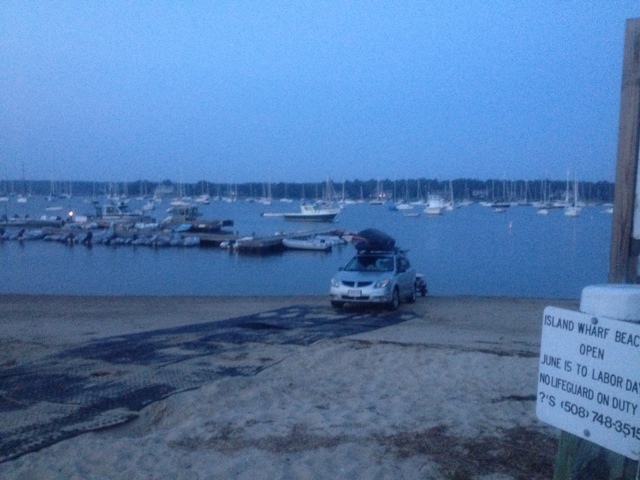 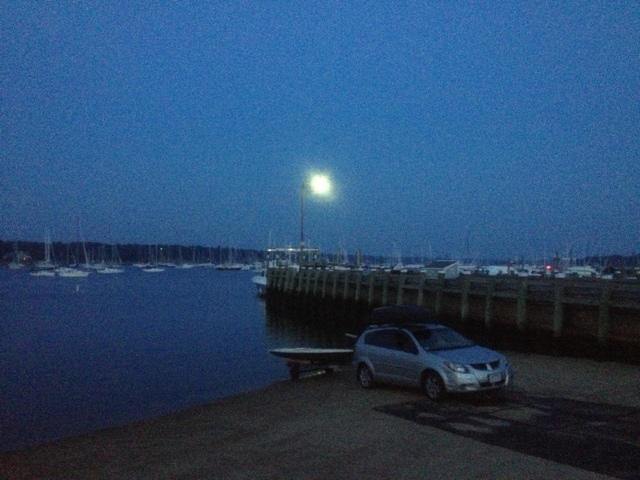 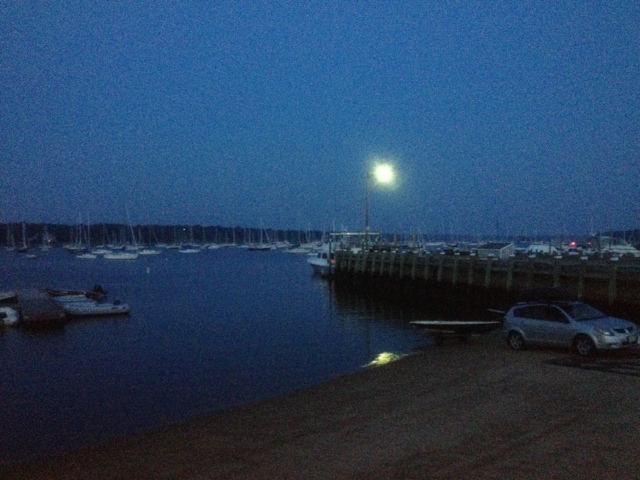 After I took these photos I got stuck trying to get back up this sandy hill.  It was terrible.  I would roll back, get the mats perfect (clean them off, level the sand underneath), clean off my wheels and every time I got up the mats would give out, roll up around the tires and I'd have to start all over again.  Experience is the only thing that kept me from really getting stuck.  Thank god for all those stuck-in-the-sand moments in Utah and Arizona.  I never let myself dig in too far and dammit I have a tow strap hidden in the body of the car, just for this moment.  Just before I gave up, I decided to reduce the weight of the car by disconnecting the trailer and pulling it up the beach myself.  I actually got the whole trailer and the laser to the top. I'm a skinny ox!

The car made it up on the first try without the laser attached.  This experience proves to me that I need to transition to using a "beach dolly" to move the boat by hand from a parking lot to the water and ditch the backing up the trailer method.  This is what Derek and Eric were doing in RI last week and it sure did look easier!

You learn something new everyday.  This weekend will be like a few days at school for me :)